Feature a modern pop sound it also incorporates a English rap that goes into a mini story of GURU Nanak in an interesting animation format.

Mystik Kaur said about the release “I am humbled to be able to put forward this track called ‘Dhan Guru Nanak’ in conjunction with the 550th anniversary (Gurpurab) of Guru Nanak Ji. Guru Nanak Ji started it all. The whole movement of awakening during a period of intense suffering. That seed he has planted sprouted through the land through the people and now the world. As I wrote this track at first I wanted to use a shabad from Sri Guru Granth Sahib Ji. However there was just SO much to say about Guru Nanak Ji that all I could say was ‘Dhan Guru Nanak, Dhan Guru Nanak’ (Gratitude & Glory to Guru Nanak Ji) , and that became the main section of the track. I included a section in English as well for my English listeners that goes into a bit of story telling of sorts”. 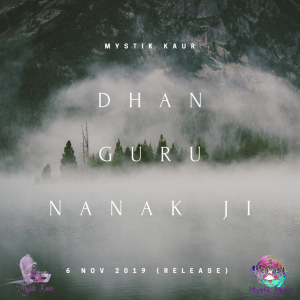