This high energy rock inspired band is super charged with girl power, and that can be seen in their debut video, a cover of “Little Drummer Boy” that is so good, it should be renamed to “Little Drummer Girl”.

Midnight Angels came to be after all three girls met in November of 2018. Christine, who was already pursing her solo career at the time, decided she also wanted to join her sister Lysette’s rock band. Eventually, the band was introduced to Kendall at a gig and invited her to join. The initial band consisted of additional members who all went their own way. This left Kendall, Lysette, and Christine, who together, started their own band and became Midnight Angels.

Midnight Angels is all about girl power and spreading positivity to other young people so they know that they too can follow their dreams.

Of course, the girls are still young and it is important to have fun with what they do. That is why they chose to debut their first video together during the Holiday season.

What is more fun than singing Holiday music with your friends and family? 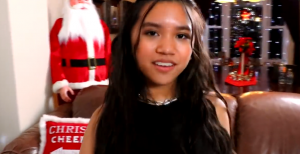 Christine says, “The best part of making the music video was being on set doing what we Love to do; making music and hanging out with each other. We loved throwing snowballs at the cameraman and his expensive camera haha!”

Within just a month of their debut, Midnight Angels was the number one band locally on Reverb Nation for the city of Anaheim, CA.

The rock inspired band will not be stopping after this video either. They have big plans for 2020.

Lysette and Kendall revealed, “We have big plans for 2020. We have a set list of about 30 songs that we will be playing live at various venues throughout Southern California. We are also going to be in the studio working on a ton of original music. We are super excited and are having a blast doing it!”